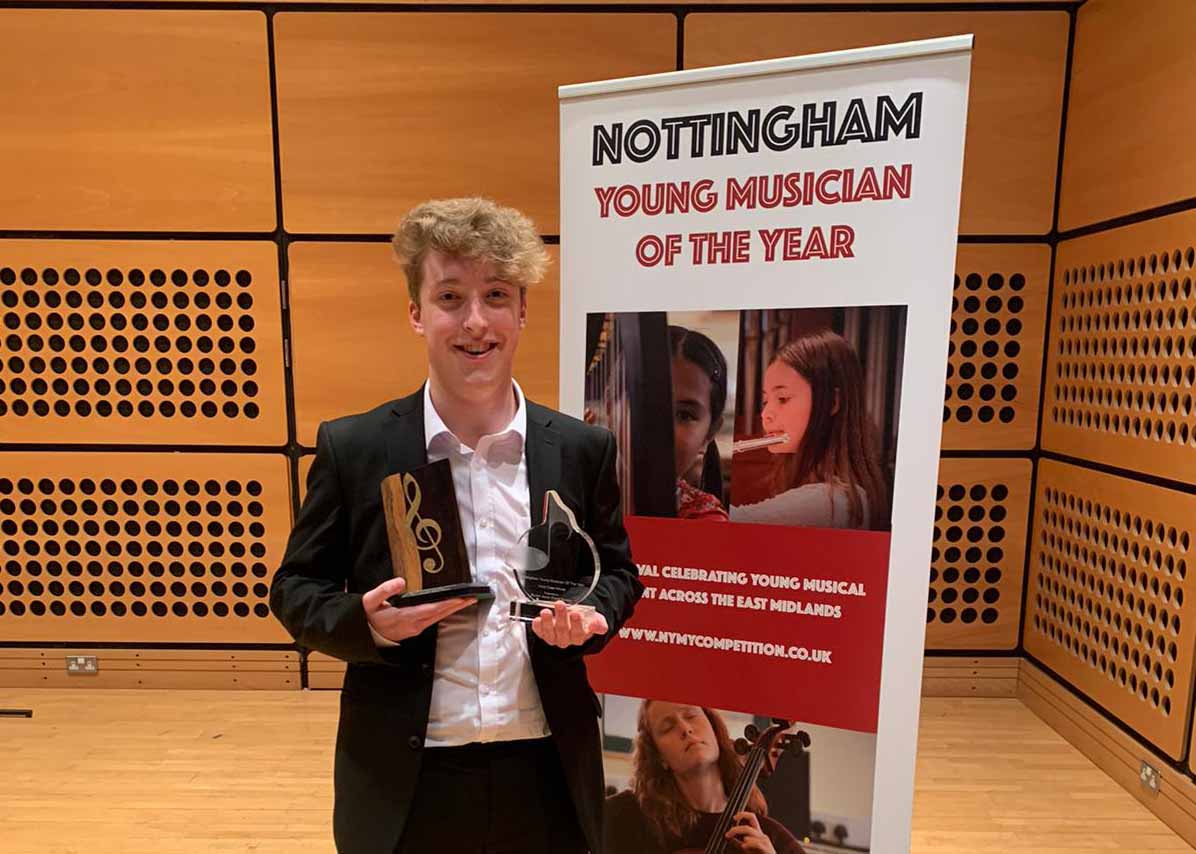 We are delighted to announce that Benjamin S has won the coveted Nottingham Young Musician of the Year award. Previous winners include several of the Kanneh-Mason family, and ON Matt Glendening. The Final was held on Sunday 21st November in the Djanogly Recital Hall at the University of Nottingham, and the adjudicator was Stephen Threfall, Director of Music at Chethams School of Music.

There were 6 finalists altogether, winners from each of the following categories – Strings, Woodwind, Brass, Piano and Voice, and an additional pianist.

Ben performed the following pieces for his recital: – “If There Were Dreams to Sell”, by John Ireland, “King David”, by Herbert Howells, “The Roadside Fire”, by Vaughan Williams, “Sleep”, by Ivor Gurney, and “Blow, blow thou Winter Wind”, by Roger Quilter. The adjudicator praised Ben for his intelligent performance, demonstrating a high level of musical integrity.

Speaking afterwards about his performance, Benjamin said he thoroughly enjoyed the experience once he had overcome his initial nerves. He felt he was able to communicate well with the audience and he especially appreciated performing to his immediate family and friends, who have supported him throughout the process.

Benjamin studies voice at Nottingham High School with Tim Lole and is intending to pursue a career in music; he is currently in the process of applying for Universities and Conservatoires. Ben’s dream is to travel the world as a solo performer and his passion is early 20th century English art song.

Headmaster Kevin Fear said “We were thrilled to hear of Ben’s success. He has always been heavily involved in our extensive music programme here at the High School and has entertained many audiences with his singing over the years.”

The Living Our Best Life Awards (LOBLA) organised by Nottinghamshire Police, celebrate outstanding young people throughout the county. We are delighted that Taona, Year 12 – known to many of us simply as T – has won the Bringing People Together Award. T was nominated by his tutor for the central reason of his outstanding […]

Harriet Avison has recently joined Nottingham High School as the new Director of Finance and Operations, here we get to know her a little better. Tell us a little about yourself? I live in West Bridgford with my husband and two sons. I love all things outdoors (assuming I have enough duck down layers on) […]

Sam Schofield has recently joined Nottingham High School as the Head of Cricket, let’s get to know him a little better. Tell us a little about yourself? Originally from South London and was Head of Cricket and teacher of PE at Trinity School, Croydon. Sport is a big part of my life from playing football […]